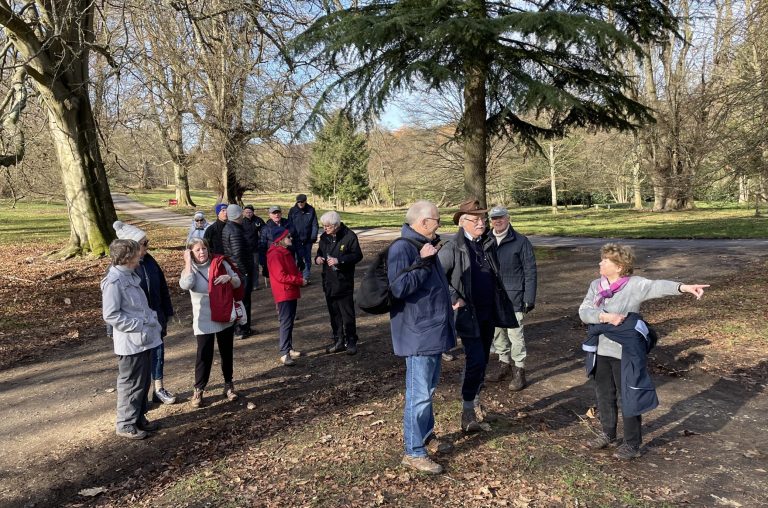 Molesiders have enjoyed many wonderful monthly walks but Feb 2022 must rank amongst the very best of them. 17 of us met in Shere and with the promise of clear skies and a little sun we set off under the guiding hand of Steve Mustoe westward along the banks of the Tillingbourne and into the land of the Albury Estate.

With dramatic views towards Newlands Corner

to our right we soon came in sight of the spectacular Catholic Apostolic Church built by Henry Drummond. He was the successful banker and Member of Parliament who bought the Albury estate early in the 19th Century and wanted to study and promote the fashionable views of the Scottish preacher Edward Irving. Drummond died in 1866 and his daughter subsequently became the Duchess of Northumberland. It is her successors who continue to own the estate we were visiting.

A very short distance further along our walk we came across a much older religious building, the former parish church dating back to Saxon times. Once it was at the heart of the ancient village of Albury. When he became lord of the manor Drummond continued the job, started many years before by previous owners, of moving the villagers from here westwards to where the present village sits. It took several families working over many decades to produce the space to develop the landscaping and the gardens around the substantial country seat Albury Manor.

Pugin, the Victorian architect also responsible for the interior of the Palace of Westminster, was commissioned to turn the old Saxon parish church into a mortuary chapel for the Drummond family, whilst the vicar of the parish at the time, who found he didn’t share Drummond’s interest in the Catholic Apostolic movement, was given a new church a mile or so to the west around which present day Albury developed.

The considerable hardships those displaced by their landlords must have endured in those days gave rise to the magnificent parkland that we now found ourselves enjoying almost 200 years later – and we were able to appreciate the magnificent trees now established past where we walked. I imagine some of us are now wondering whether all of them managed to survive Storm Eunice which struck everyone in our part of Surrey on the day after our visit. We hope so and are certainly grateful to Steve for sharing with us a most interesting and beautiful area of land so close to our own homes.

And thanks as well to Peter Wall and John Brice for their excellent photos.

There’s much more of the Albury story at https://www.alburychurches.org/history.html