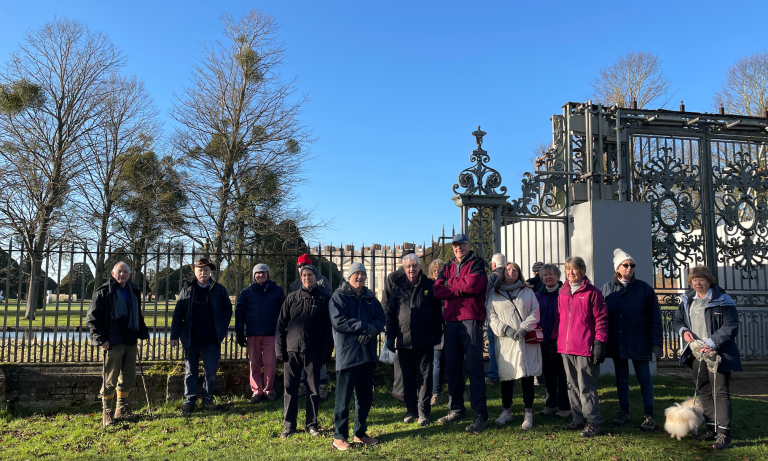 17 Moleside Walkers took full advantage of the only chance the club has had in January to get together in person – and we found ourselves witnessing walking on water.  Gathering initially in Bushey Park we had a close to record turnout of regulars and an  impressive start to our 2022 programme.

Led by our group coordinater Steve Mustoe we skirted the brick wall that marks the northern boundary of Hampton Court passing the  Flower Pot Entrance before gaining access to the parkland of the Palace itself by the Paddock Gate.Almost immediately we lost the clamour of the A308 and found ourselves pretty much alone in the 750 acres that stretch eastward from Hampton Court almost to Kingston Bridge.

bite to it sufficient to require the local moorhens to take a wintery walk over the ice on Long Water before finding somewhere to swim and feed.But well wrapped up and sporting

a colourful array of woolie head gear, conditions proved perfect for a memorable stroll for us through this historic landmark.One or two of us wondered where the energy came from to power the fountains of clear water that feature at the end of the decorative canal.

Researches have revealed that the water we were admiring had already travelled at least 12 miles, extracted from the River Colne near Heathrow and carried downhill in an artificial river commissioned by Charles 11 and completed in 1660 to provide fresh water to Hampton Court.We were standing just feet away from where it finally spills back into the national river system by joining the Thames.

Our route then took us north, back across the busy A308 and we re-entered the much more populated Bushey Park by the The Church Grove Gate in Hampton Wick.Altogether a stimulating morning  demanding a very satisfying burst of energy for which all of us are grateful to Steve` and to Peter Wall for his great photos.