The heat gets turned up for the Hackers at Pacesham 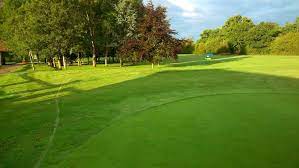 Six members took up the August challenge on one of the hottest days of our all too brief summer. Twelve holes were due to be played, playing the 6 hole course twice.

Having played the first six holes contenders manfully started around again but only managed the first two and the last one. The reason given was that it was too hot. As a result the game was not completed and there was no winner for the month. Peter Gauld remains our champion – and everyone present made it to the club house to quench their thirsts.