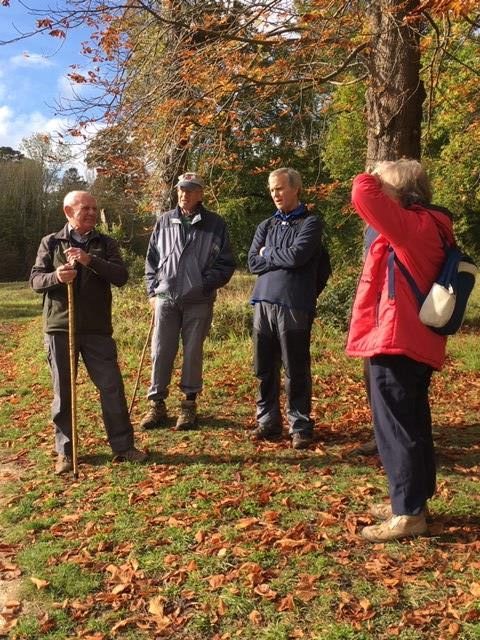 Rule of 6 & Risk Assessments = totally compliant Walking
Following the revisions to the Covid restrictions which had caused us to cancel our September date Steve Mustoe, ably supported by Peter Wall & David Owen, 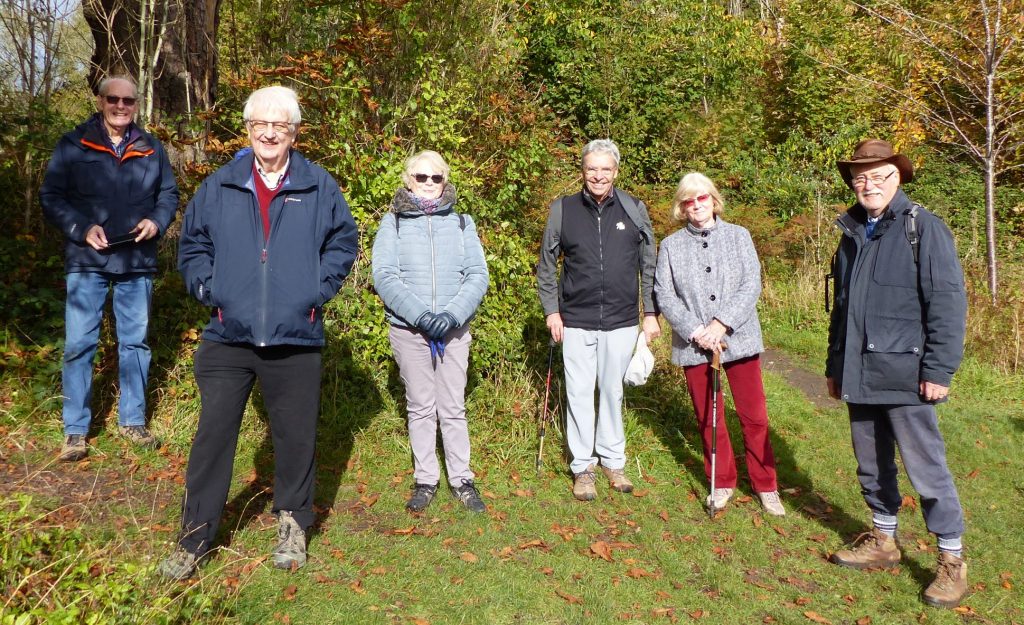 redesigned the club’s approach to our monthly walks and 18 of us were blessed with sunshine as we explored Norbury Park in October.  Subdivided into pre determined groups of 6, each one navigated by one of our group leaders, we maintained 5 minute intervals as we followed a carefully prepared route, risk assessed following the guidance of the Ramblers Association. A very big thank you to Steve for wrestling with all needed for us to be compliant.

Two of us took advantage of the highly efficient woodland coffee bar that has popped up by the Norbury Sawmill whilst we all, in turn, took in the amazing view of Canary Wharf and Dockland London and admired the fine houses on the east side of the Mole Valley.

Through the woods, close by Druids Grove, and across the fields we progressed to the Crabtree Lane car park from where we turned north for the more open walk back to our starting point close by Bocketts Farm.

As we made our return we got the news that the government had now further tightened the Covid regulations which may mean that this could be our last walk for a little while. 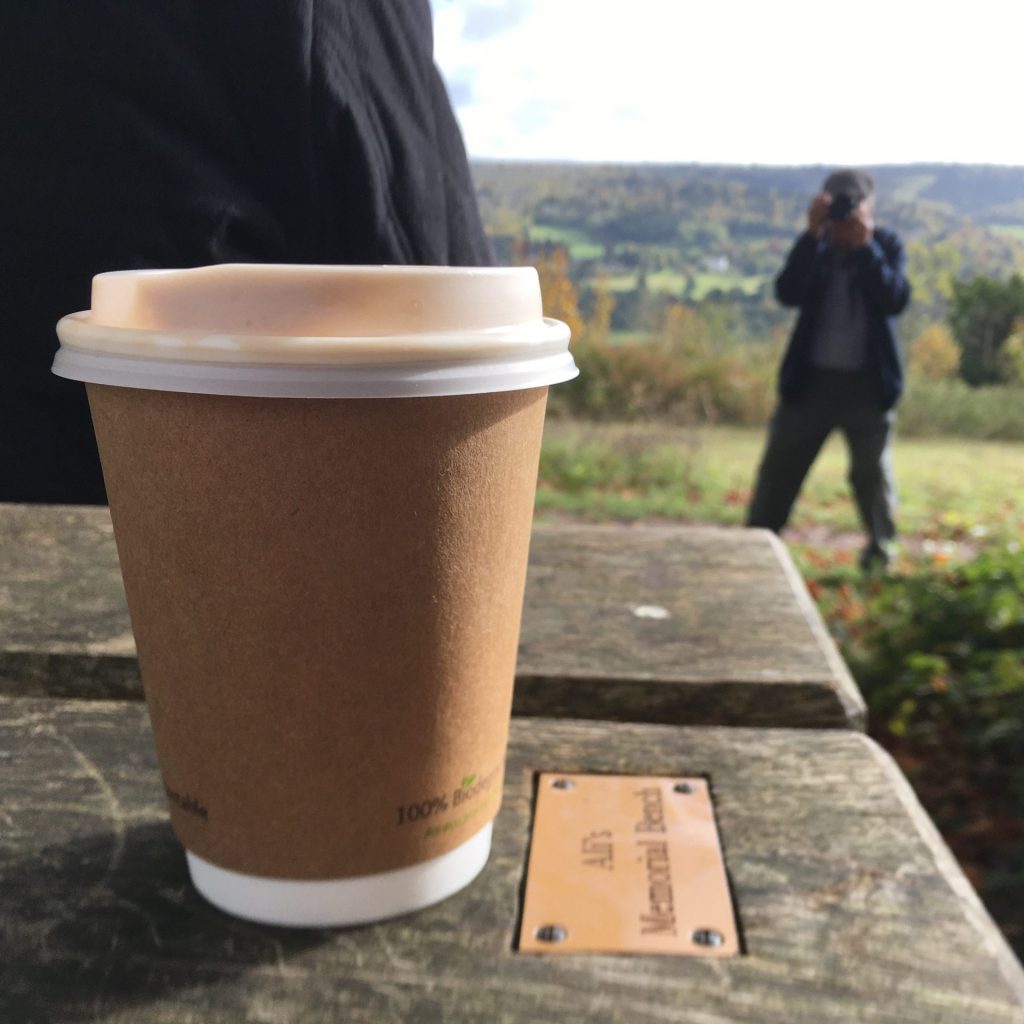 But we cannot discount the determination of the Moleside Walkers – and our group coordinator – to think yet again about how we might continue walking whilst taking strict note of the responsible behaviour we must all support and demonstrate.  It’s very sad that we may not be able to emulate soon the record breaking turnout we enjoyed back in August – but all of us will be watching our emails closely for news from our leader about any plans for November. 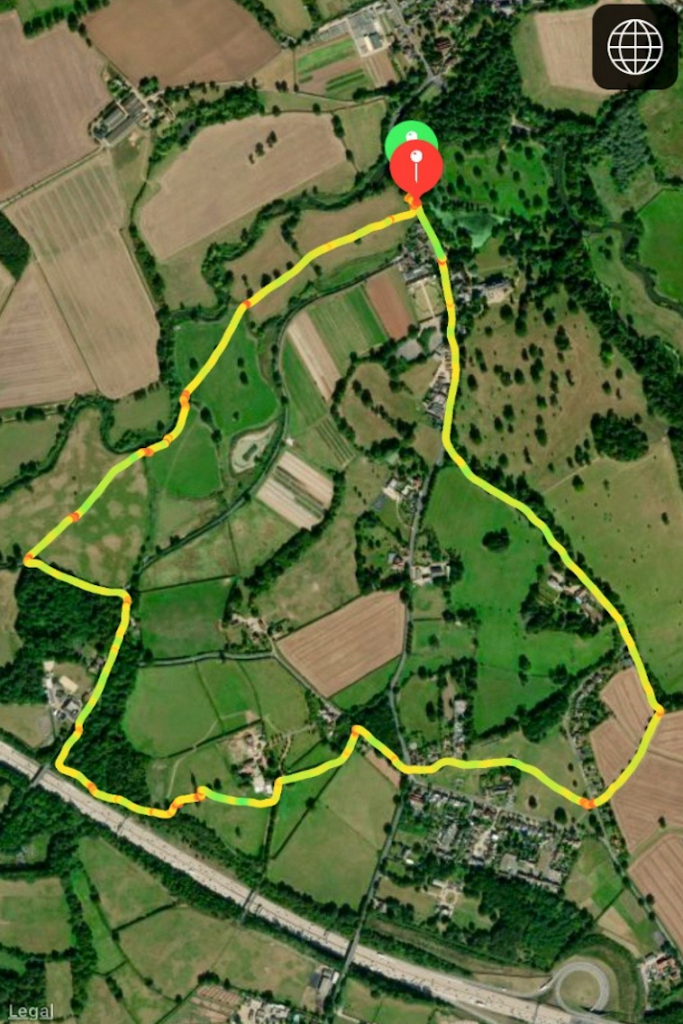 More Molesiders than ever before – or at least as far back as any of the stalwart club regulars could remember – were with us beside the Downside Bridge over the Mole for this memorable walk through the local water meadows. And it was a first test for a digital mapping service which we hope we can develop to create an archive of enjoyable local routes to which we can always return.  Peter Wall & Alan Willis did the mapping as we all followed our leader for the day – Paul Walker. With us too for his first Moleside Walk we welcomed Philip Schofield as we followed the carefully identified Right of Way westward 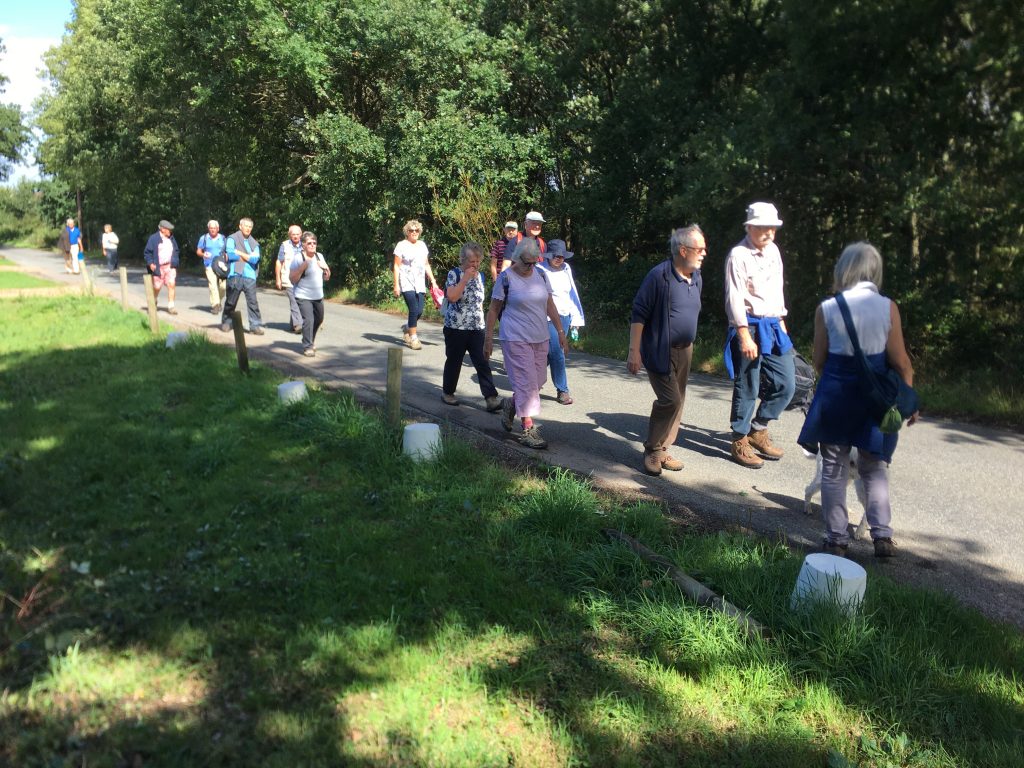 towards Pointers Lane and the corner of Surrey that was sliced through by the M25 in 1986.  Apart from the short section of our walk where its route has to follow noisily close by the motorway everyone enjoyed the peace of the fields around 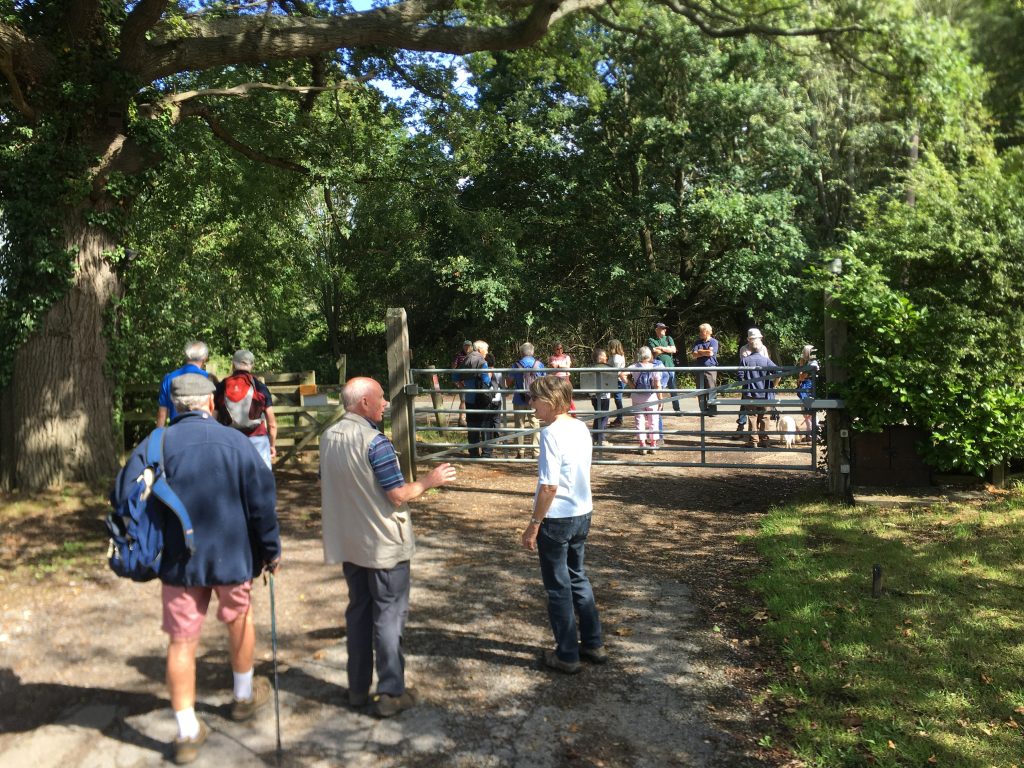 Pondtail Farm to the north of the village of Downside. We returned past the tiny Chapel and onto the lane that skirts Cobham Park. And, almost like old times, a dozen of us retired to The Plough, the pub adjacent to where we had started our walk, for a thoroughly enjoyable outdoor lunch under the trees.

Thursday 23 July
Out in force again

The sun shone brightly for the 15 of us who rendezvoused at the Shere Road Car Park on Sheepleas under the guidance of Brian Manners. It was excellent to welcome Ray Blues amongst us for his first Moleside walk in some time.  Those of us who know – from personal experience – the chances of becoming pretty lost in this wonderful mix of open space, once coppiced woodland and deeply shady forest always 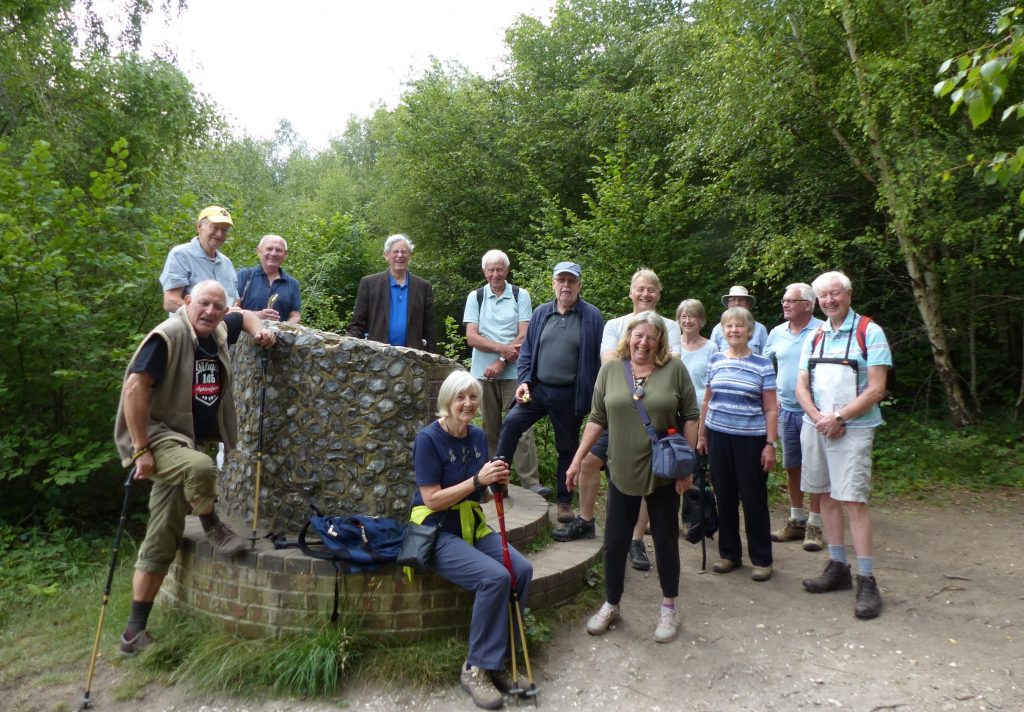 admire the confidence that Brian transmits here and this walk was one of his very best. As we knew he would he got us safely to the viewpoint which has featured in many previous Moleside visits here.   But it was the open spaces that stole the show this July, resplendent in wild flowers of many colours – almost as if the contents of an enormous sack of typical English meadow seeds had been carefully distributed across the many acres.

As Brian had promised there were a few gentle inclines but positively no stiles. Easy walking it may have been and any challenges would have come from the many finger posts we encountered, each one telling us no more than the routes in these directions were all Public Bridleways.  Not much of an aid to 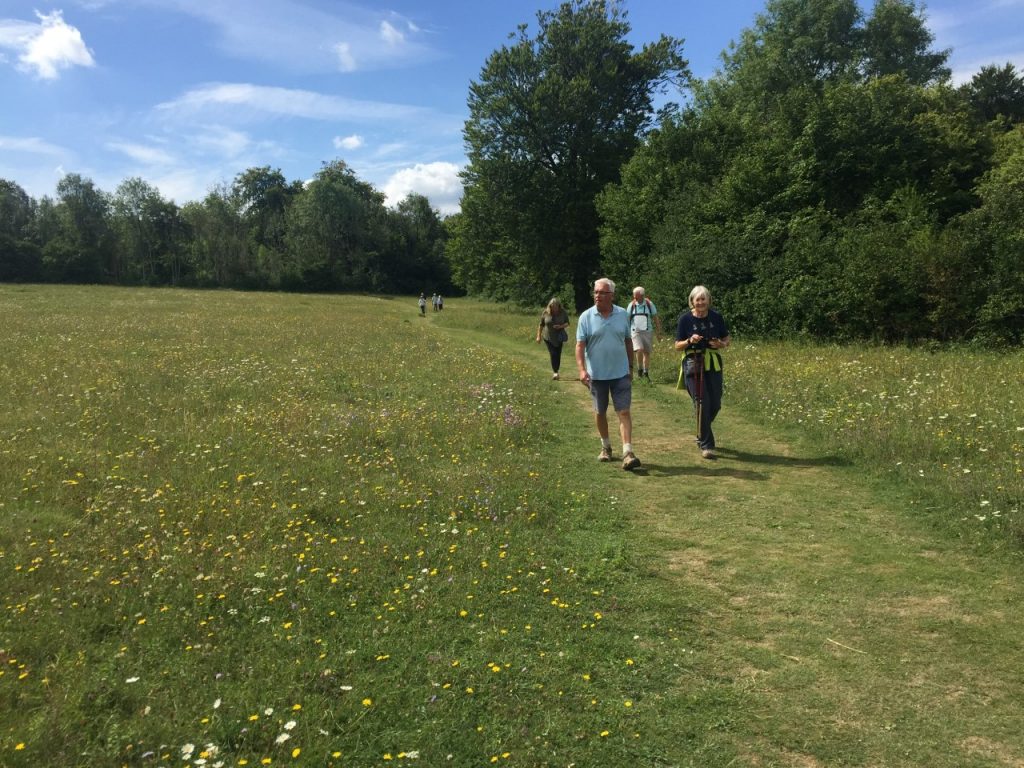 navigation but we had no need of such assistance  and we covered a little over 3 miles together in just 2 hours. The 6 of us in the group who, carefully following recommended procedure, retired to The Queen’s Head in East Clandon for refreshment afterwards, all felt we had earned a drink – and the pub lunch that followed.  Hopefully more of us will be able to do the same when we get together again in August.

Wednesday 24 June
The Walking Group in action again – for the first time since February.

Our first walk for 4 months saw 9 of us revisiting Puttenham Common and the Hogs Back. We followed the North Downs Way for part of the route and enjoyed glorious sunshine throughout. 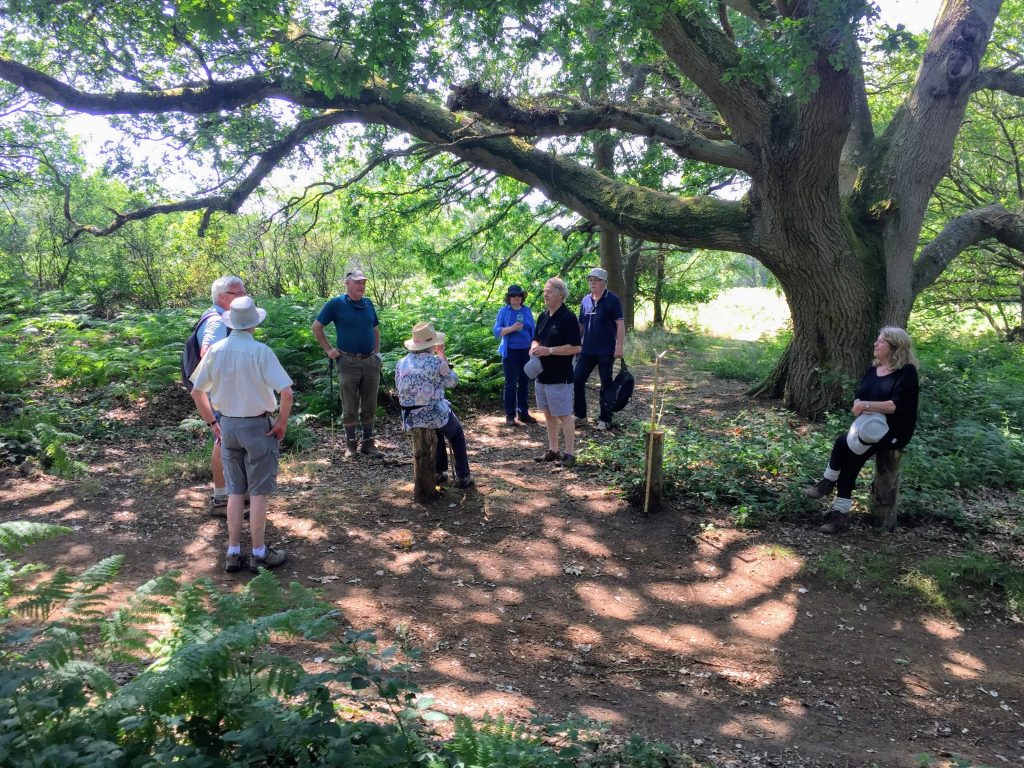 We walked this route last winter but this time we had leafy trees, fresh ferns and even an abundance of tiny froglets hopping across our path.

Steve Mustoe led the way and looked a daunting figure carrying a length of 4X2 wood over his shoulder because one of the stiles we had to take was broken.

Regrettably we still can’t retire to a pub afterwards but a few folk had brought a packed lunch to enjoy. 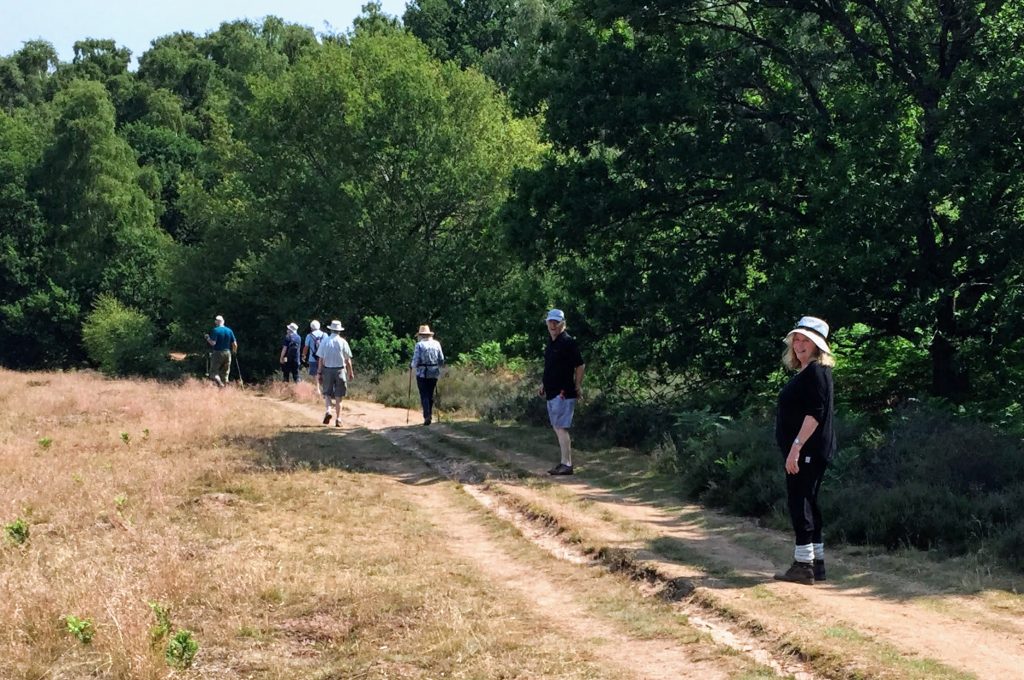 Social distancing was observed and a great time was had by all.

Thanks Steve for getting things going again on two legs and thanks too to Peter Wall for his photographs.  He’s particularly proud of the one we feature below but wants it to be made clear that he is not checking whether it could be time to leave for home.  Rather than having to be behind the camera he managed to feature in his own group shot by successfully activating an impressive gizmo in his Apple watch.  An achievement of which he can be very proud. 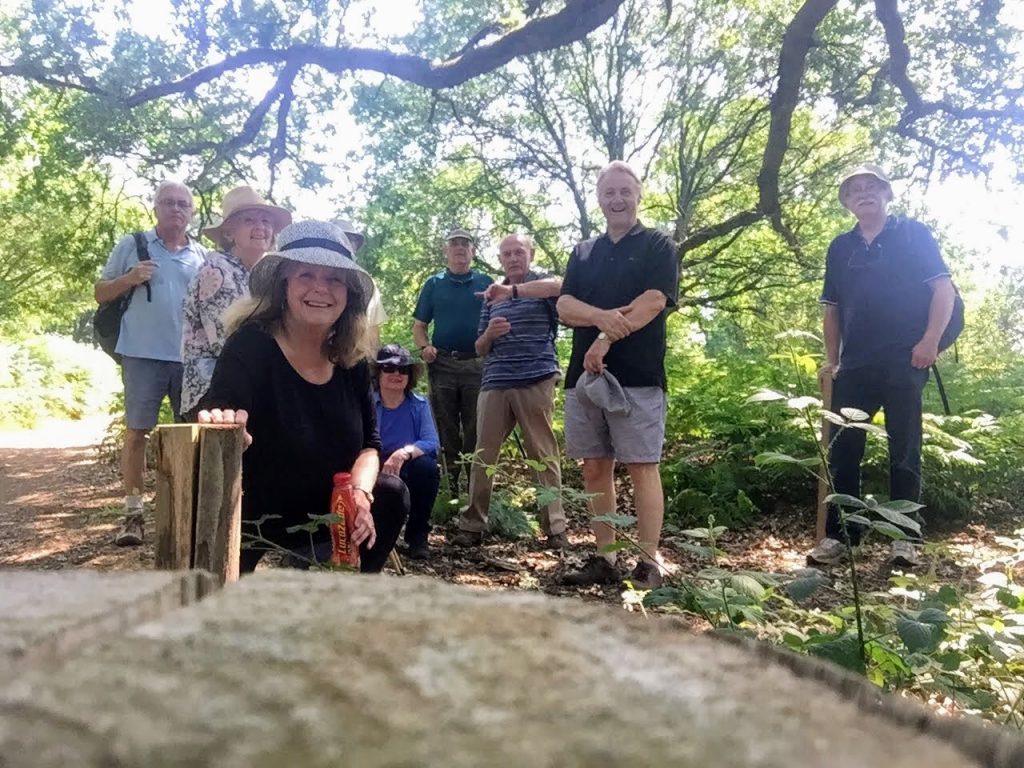 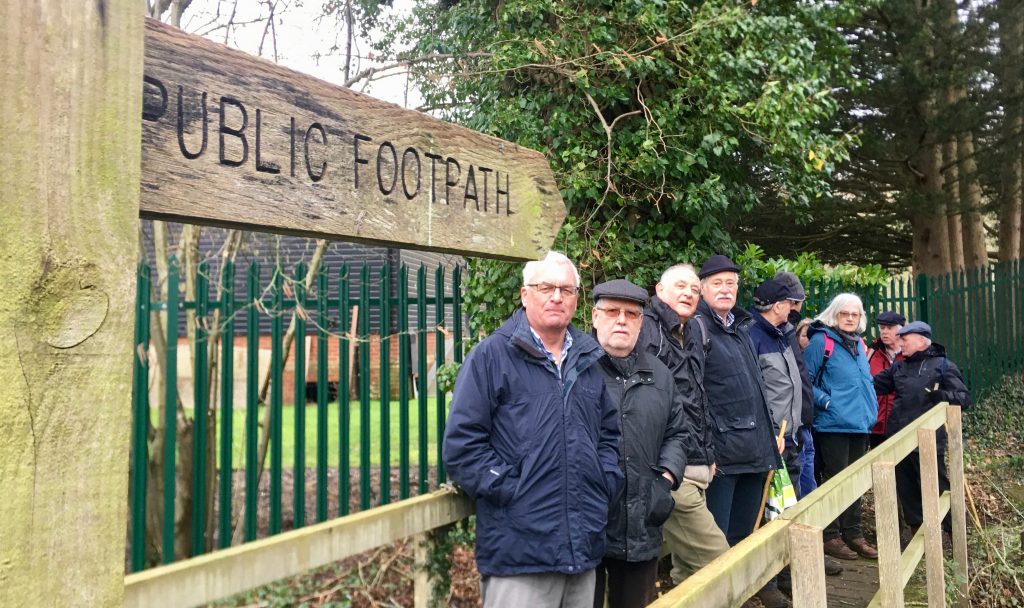 Starting from the Chobham High Street Car Park we paid our dues and set off through the Water Meadows along the banks of the Miller Bourne towards Emmetts Mill. We were surrounded by water most of the way – and not all it was in the stream.  By the time we reached the end of the runway at Fairoaks the remnants of Storm Dennis had started to set in but we overcame the challenges of 5 miles of unusually muddy walking, encountering horses, but not the promised goats who we suspected had been defeated by the conditions, before the skies opened up a pretty ferocious final downpour.  We all felt both the delight and sense of personal satisfaction on reaching the haven of The Sun Inn, where we all enjoyed a wholesome lunch somewhat later than anticipated. Thanks to Steve and Lynda Mustoe for a memorable experience.  It’ll be great to repeat it – when we can be more sure the sun’s going to shine.
https://suninnchobham.com
Wednesday 22 January 2020 – The Woodman, Ashtead
A baker’s dozen of us made for a promising start to our new year of walks.
Our leader David Owen prudently elected to take full advantage of the walkways and network of regional paths that criss cross Ashtead Common to avoid the seasonal mud that  often plagues our January outing.

What the wonderful Common has also done in the past is inflict mild confusion on our guides and before long Stephen Rouse was offering his support in developing an alternative route bypassing one Horse Ride that would have defeated even the most impressive of wellies. 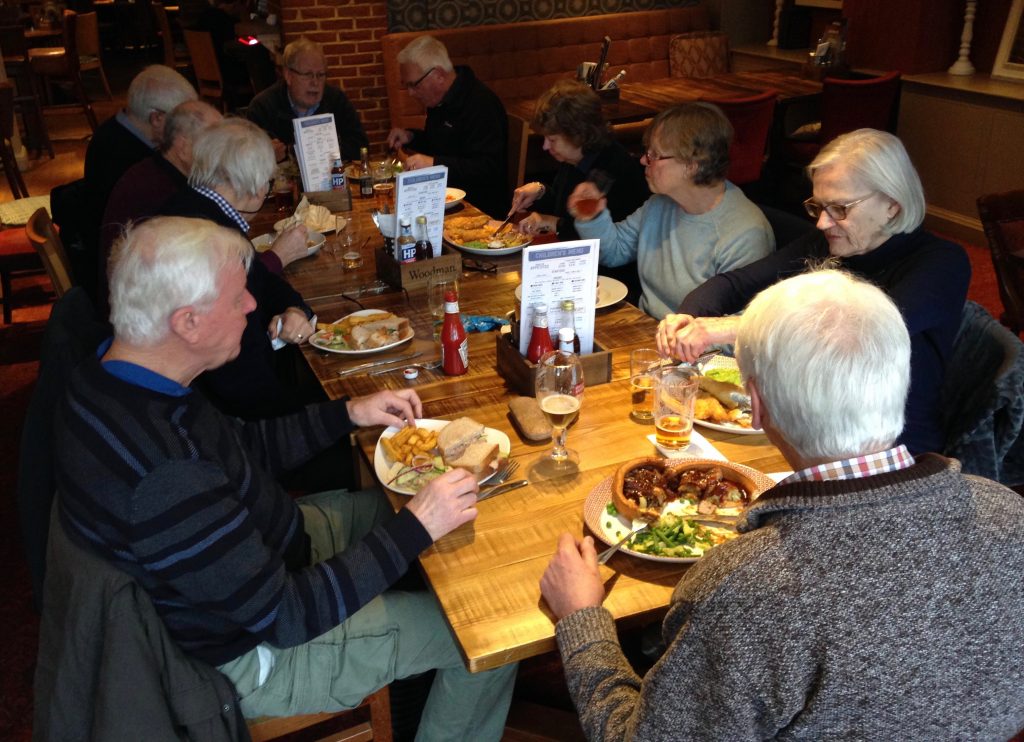 Thoroughly appreciating the tranquility of our misty surroundings we negotiated just over four very level miles and in a couple of hours were delighted to find reviving hospitality at The Woodman.  Thanks to David and Stephen for their excellent navigation – and to Steve Mustoe for undertaking another year of coordinating our keep fitter efforts together.
Our verdict on The Woodman, Barnett Wood Lane, KT21 2DA – wholesome food, wide choice of beers and very prompt service.
Thursday 19 December 2019 – The Jolly Farmer, Puttenham
As has often proved the way in 2019 the Moleside Walkers were blessed, for our last walk of the year, with much kinder weather than the 8 of us were expecting. 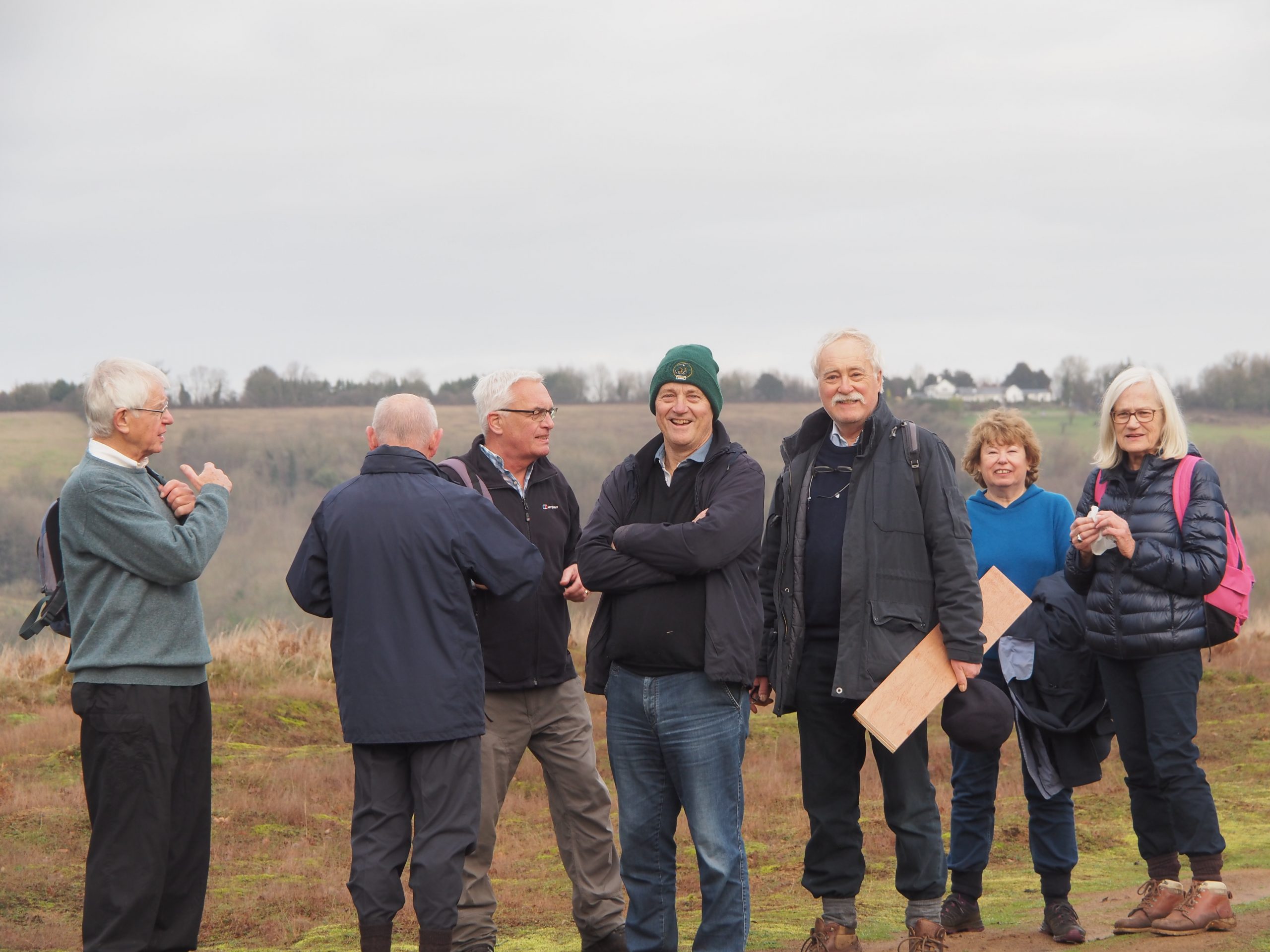 No great sunshine but at least no sign of the torrential squalls we had all come prepared for. Led by our group co-ordinator Steve Mustoe, thoughtfully carrying timber in case any stiles needed DIY, we met on the south side of The Hogs Back and set off downhill from what we noted was called the Puttenham Top Car Park. Through mixed woodland we passed 2 attractive lakes (The Tarn & General’s Pond) and then started a steady ascent towards the North Downs Way. 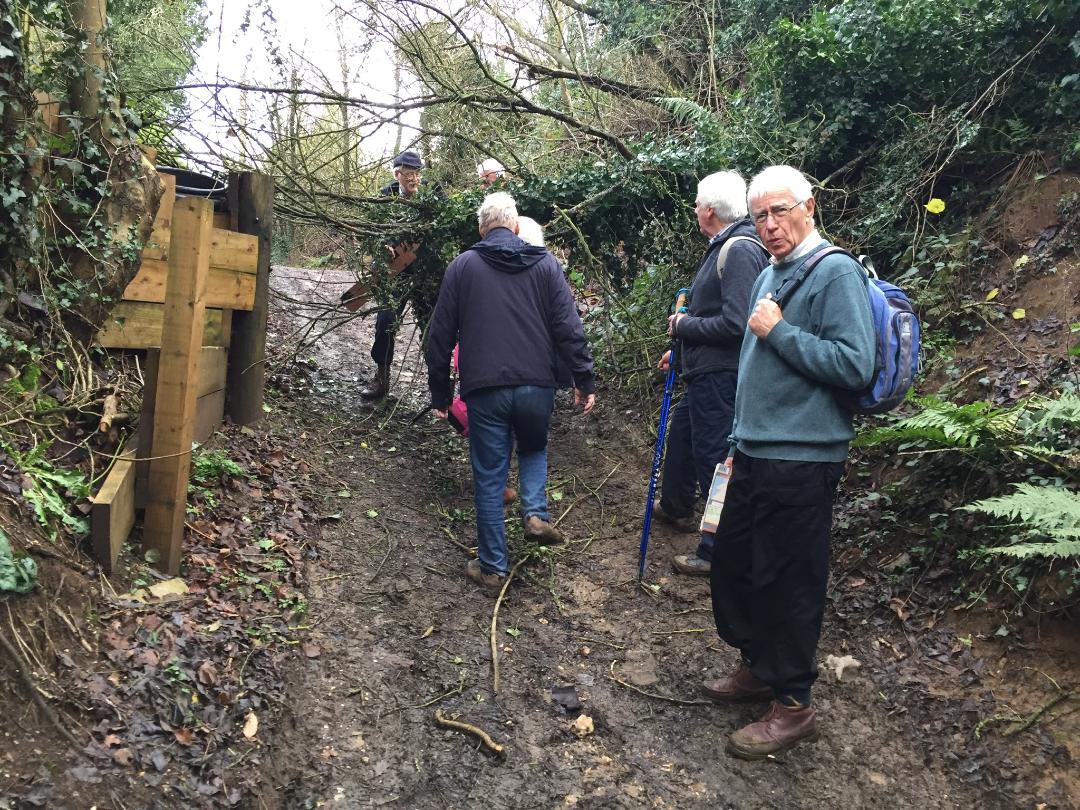 Despite a substantial fallen tree doing its best to prevent our progress, we kept to our plan and, after a couple of hours very pleasant walking, made our way into the open fields that led us downhill to the Top Car Park.  Great views to the south were enjoyed on our descent before repairing to Puttenham’s Jolly Farmer for an excellent lunch – which several of us intend to repeat on another day. 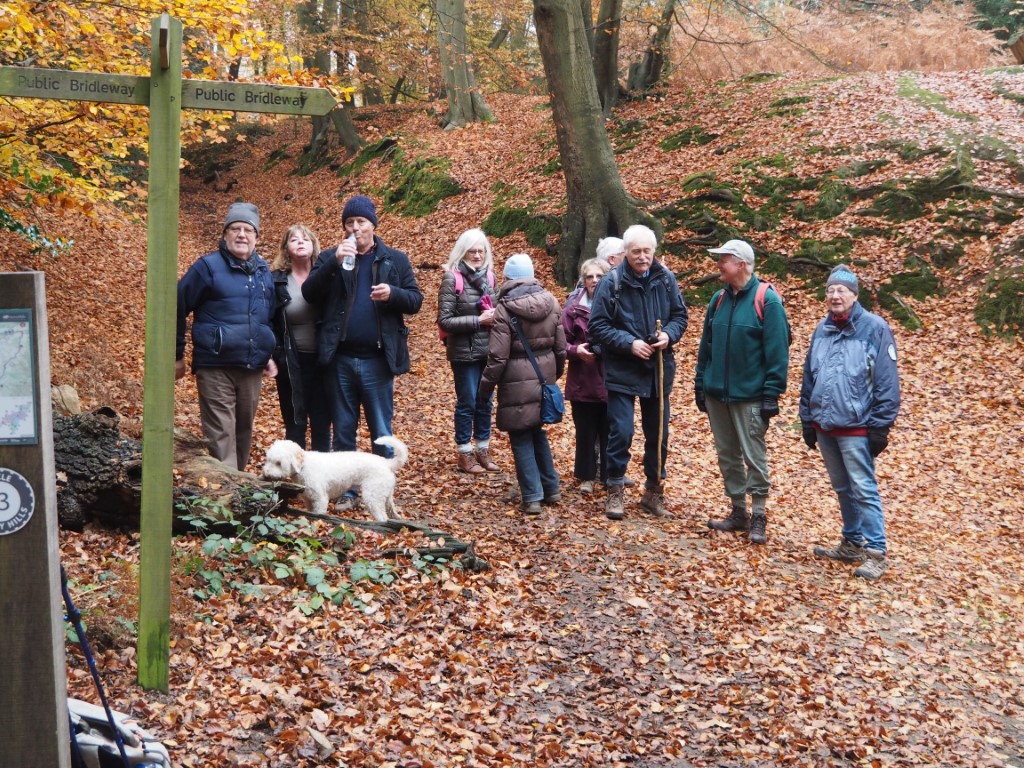 With the ground covered in autumn leaves and soon finding ourselves deep in ancient woodland, we were delighted to be  accompanied today by Steve’s dog who made sure we were all together. 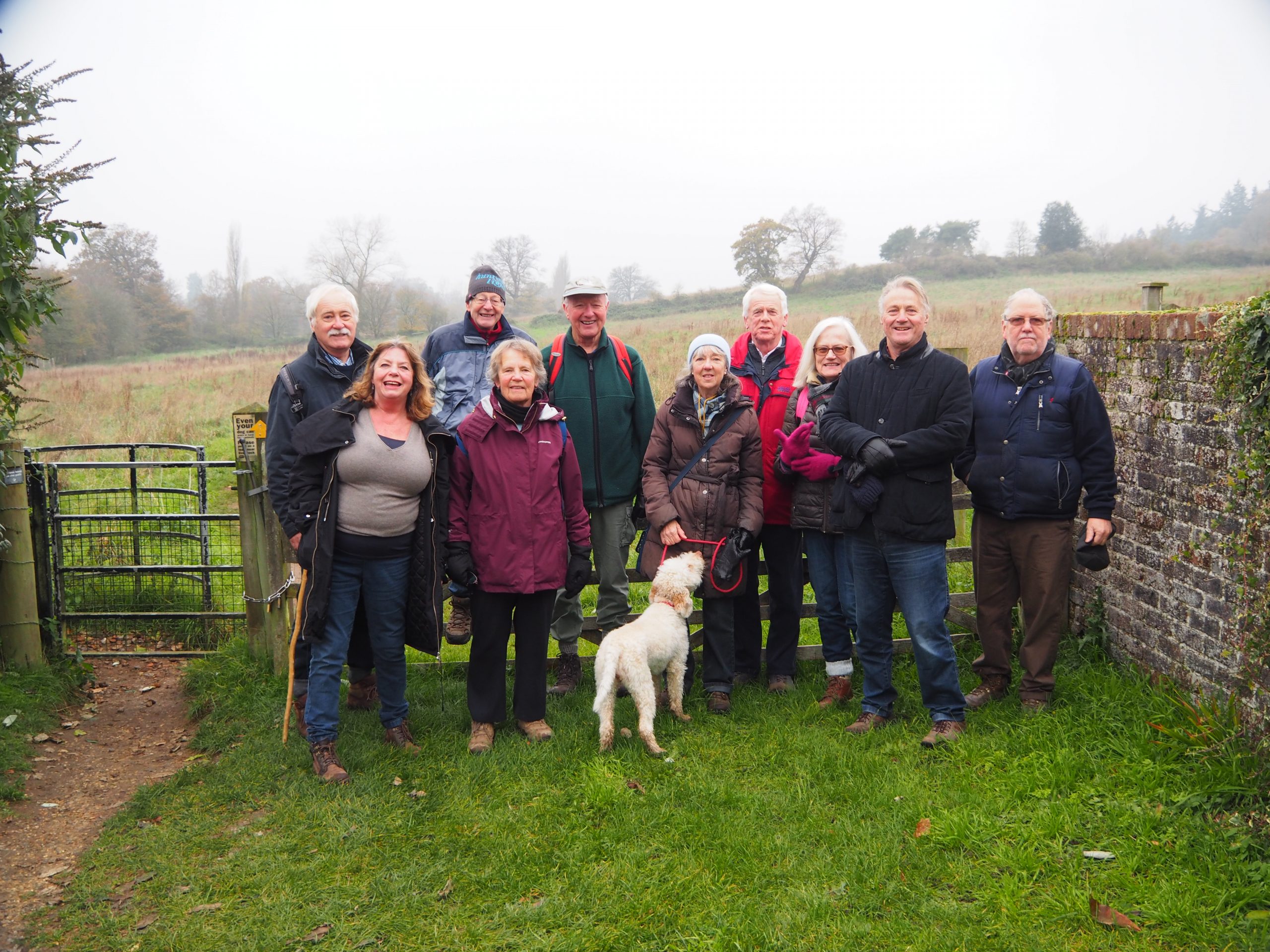 Although it was quite cold we soon warmed up walking.

The walk took us to the north of Loseley House where we had a good view of the house in the ground of the park. Then on again and finally back to the pub where we enjoyed our lunch.

Thursday 24 October – Half Moon, Ripley
The weather was not kind to us today – after a spell of cloudy but dry conditions earlier in the week our outlook for Thursday promised a generous soaking under leaden skies.  But such things do not discourage the Moleside regulars who turned out in impressive numbers.  Led by Brian Manners we investigated the stretch of

the Wey Navigation between  Ockham Mill, past Walsham Gates finally reaching  Papercourt Lock.  We covered about 4 and a half miles taking full advantage of the stile free, flat landscape that we quickly reached starting from Ripley Green.  Following the Navigation we reached the Pyrford Road

enjoying the slightly eerie atmosphere that the weather conditions were imposing over Newark Priory.  Once at Papercourt we made our way back to Ripley passing  the local gravel pit that turned into an impressive lake years ago in good time for our lunch engagement at the Half Moon.
Thursday 19 September – Duke of Wellington, East Horsley

Most of us on this walk agreed that Sheepleas can be a very misleading place but under the orderly guidance of Alan Reilly there was no chance of the 14 of us getting lost today. Blessed once again with fine sunshine the famous views the area affords quickly showed themselves as we dropped from the hill up Hook Wood. We passed Hillside Manor with its extremely smart farm facilities and made a  gentle progress down to the viewpoint that we last visited on a Moleside walk  in November 2016 – when some of us were a lot younger.  In the bright September sunshine and with the trees around still in magnificent full leaf, the view we had enjoyed then was completely obliterated today.

But there were those amongst us who could remember, on our earlier visit, certainly seeing the Crystal Palace TV transmitter and maybe even the London Eye.  We’ll have to return when the leaves have fallen and check.  But all such strenuous thoughts were quickly dissipated over a very welcome lunch at the most hospitable Duke of Wellington.  Great to have Paul Tiller back amongst the usual crowd.  Thanks to Alan and Signe for another great ramble.

HACKERS – 3 champs. on the Rostrum